You are here: Home › Who Is John Roger Eggers? 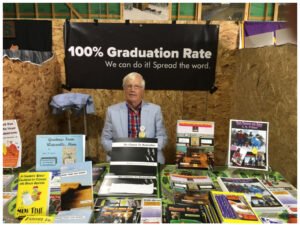 John spends much of time directing Project Graduate, which has as its goal 100% graduation rate for all students. He is especially interested in helping Native Americans graduate from high school and college. His most recent publication “100%” is devoted to helping people understand the why and the how. He believes that when all people get involved (educators, community leaders and parents), the goal can be accomplished. In doing so we can help eliminate poverty and promote world peace.

John holds an undergraduate degree and three graduate degrees from Mankato State, Temple University, and the University of Northern Colorado including a doctor’s degree in educational change and innovation. He has toured schools in the former Soviet Union and he has also studied at Harvard. During the summer of 1996, John served as a volunteer for the summer Olympic games in Atlanta.

John has written a weekly column for the Bemidji Pioneer newspaper since 1992. He has also authored 21 books.

John was one of fourteen to be selected to develop a sports programs as a Peace Corps Volunteer in Uruguay where he coached basketball in five sports clubs, served as a camp counselor in an International YMCA camp and church camps and taught physical education at the Uruguayan American School.

John began teaching in 1964 at All Saints School in Madison Lake, Minnesota. His first public school experience involved teaching ESL at Pyne Poynt Junior High School in the inner city of Camden, New Jersey, where he also served as recreation director for North Camden. Following this experience, John and his wife, Kathy, taught at the Iranzamin International School in Teheran, Iran.

John obtained many of his ideas for innovative programs while teaching at Mankato Wilson Campus School, which, at the time, was under the direction of Dr. Don Glines and was considered to be the most innovative school in the United States.

John enjoys helping teachers grow. To this end, he supervised over 700 student teachers as a university professor for the University of Northern Iowa in the 1970′s and 1980′s. His 53 years of teaching experience have taken place in Minnesota, Colorado, Iowa, Illinois, Wisconsin, New Jersey, Uruguay and Iran. Much of his experience has centered around creating innovative programs and teaching in alternative kinds of schools in culturally diverse settings such as the inner city of New Jersey and on Native American reservations. He has served as the first charter school director at the Naytauwasch Community Charter School on the White Earth Reservation.

From 1985-1992 John served as high school principal of Red Lake High School – the largest totally American Indian school in Minnesota. The school’s programs on two occasions won Governor Star awards for the most innovative programs in Minnesota. Among the most successful programs at Red Lake was the Four Winds Alternative School, which graduated nearly 100% of its students before he left in 1992. This was a significant achievement for American Indian schools.

John has led workshops in many states while working for the Institute For Graduate Studies (IGS) based in Parker, Colorado. He directed its Center For Future Studies and continues to teach for IGS (www.attendigs.com) as an on-line instructor. It’s founder, Dr. Edward Pino, is one of John’s mentors. Much of what he believes about teaching and learning have come from Dr. Pino. John currently serves as an advisor for IGS.