You are here: Home › Blog › The Best Memorial Day Graduation Speech Ever 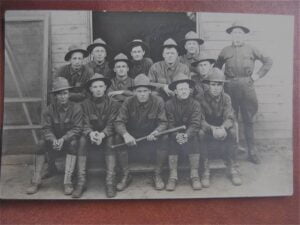 “I thing we should ask Mr. Kinrod,” Jason said.

The senior class was discussing who they should ask to be their high school graduation speaker. Because this was the first time that the the graduation ceremony was on the same day as Memorial Day, they wanted somebody special.

“I think that is a great idea and I second the motion,” replied Alicia, a classmate of Jason’s. “Mr. Kinrod was a veteran of World War II and he has worked in this community all of his life.”

The class took a vote and they all agreed that Mr. Kinrod would be asked. But would he accept? He was 95 years old.

It was true that Mr. Kinrod served his country in World War II. He won two Silver stars and a Bronze Star. He was at Normandy and at the Battle of the Bulge. He had seen it all and left the Army as a Master Sergeant.

He worked at his father’s Phillips 66 gas station after the war and eventually took it over. Although one of his workers was now the manager, he still went to his tiny office every day except Sunday when it was closed.

Mr. Kinrod never married. He was known by everyone in the community, young and old, for his honesty and excellent service. He was quiet, hardly engaged in small talk and always carried a book with him.

When he was not working he was passionate about growing tomatoes, fishing for crappies and hunting for ginseng. He had the best tomatoes in town and gave his over flowing crop to anyone who would stop by and ask.

He knew where the crappies bit and would post a note on an old metal Dad’s Root Beer chalkboard to tell people where to catch them.

Mr. Kinrod owned eighty acres of woods outside of town and that’s where he dug out the ginseng and sold it. There were rumors that he had a pretty hefty stash of cash in the bank just from selling his ginseng. Mr. Kinrod never talked about it and if you were to ask him, he might say, “Oh, some years are good and some aren’t so good.” That was the end of the conversation.

When Jason and Alicia asked him if he would be their speaker, he said. “Well, I’ll tell you what. It’s an honor that you asked me and since I don’t say too much anyway, I need to make up for some lost time. I will gladly accept your invitation.”

Everyone wanted to hear what he would say on a sunny warm Memorial Day. The doors of the gymnasium were open to let in the fresh air; sunlight was streaming through the windows and everyone who attended waited to hear the quiet, well respected, World War II hero.

“I want to thank the senior class for asking me to speak on this special day. Because I am 95 you all are probably thinking that I am going to share with you the positive things I have learned over those many years but I’m not. In my day we didn’t dwell on the positive as much as we did to learn from our mistakes. This is why I chose to tell you about three big mistakes I made in my life. My hope is that you won’t repeat them.”

“My first mistake was that I didn’t continue my education after the war. In those days you really didn’t have to go to college if you already had a decent job. Since my father, as you know, operated a filling station, he wanted me to work for him and that’s what I did.”

“Today is different, isn’t it? Good paying jobs require more schooling. Plus to solve our problems today—we have so many—it will take the brain power of all of you. So, don’t make the mistake I did. Go to school. And, if for some reason, you can’t, do what I do, carry a book with you wherever you go.”

At this point, Mr. Kinrod took a book from his vest pocket and showed it to the audience and they all laughed.

“The second big mistake I made was to love my work more than loving someone else. It’s not good to be alone and although I had chances to marry, I chose my work first. Big mistake. Still, I am happy to have so many friends in this community and I am thankful for all of you.”

At this point the audience spontaneously clapped to show their approval. After they quieted down, he continued.

“As you know, I fought in World War II. War is a mistake. Let me explain.”

“Yes, I fought in World War II. It was not a fun war. No wars are fun as any veteran will tell you. We honor our soldiers on this very special day because of their sacrifice made not only for our country but for all people everywhere.”

Again, the audience burst into applause.

“What is my message to you wonderful young people? Don’t make the mistakes I made is the first message. The second message is just lead a good life and if you have too many tomatoes, give them to your neighbor. Now, let’s all go fishing.”

Everyone in attendance thought it was the best Memorial Day graduation speech ever.