You are here: Home › Blog › You Can Improve Your Public Speaking

You can be a better public speaker 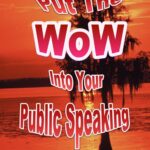 Public speaking can be painful and the goal of this article is make it less painful. It is intended for anyone who speaks in public, which includes everyone.

You say, “Yes, but I never give presentations or speeches. I also never read aloud in public. So, why should I care about how I speak?”

More specifically, if you are in the business of making an occasional speech, making presentations to others, working with customers or clients or answering the phone in an office, you need to care about what comes out of your mouth.

You can dramatically improve by working in five areas. There is nothing challenging about these five things. Anyone can learn them.

As a student and teacher of public speaking for almost forty years, I have found that one of the most common mistakes we make is that we speak too fast. Have you ever noticed how difficult it is to understand the lyrics sung by a pop singer? This is what it sounds like when someone speaks too fast. It’s hard to discern what is being said.

How does one slow down? Here are two things to work on. Try to put more pauses in your speaking. By a pause I mean just stop and hold your breath for three or four seconds (which will seem like a long time) and then continue. Do this periodically.

The second thing you can do is to simply just tell yourself, “From now on I am going to make an effort to speak more slowly”. Take this a step further by asking someone to give you some feedback.

Have you ever said, “Could you repeat that again or pardon me?” We often say this to someone who does not enunciate his or her words. In my earlier days, I had a habit of speaking too fast and running my words together. Speaking in public was my worst nightmare and so I wanted to say whatever I had to say as quickly as possible. It wasn’t until I joined Toastmasters International that someone coached me to talk slower and enunciate my words. Young people are especially prone to talking too fast and running their words together.

This is no fault of theirs. They just haven’t learned basic public speaking skills. Public speaking is the most overlooked skill in our schools. If it were taught year after year, it wouldn’t be nearly be as fearful.

Americans use lots of lazy language when they speak. Our sentences are filled with “ya know’s,” “gotcha’s”, “gonna’s”, “wouldcha’s”, “um’s” and “ah’s”. Let’s not forget “you betcha’s”.

You might say that these add a little spice to our language. True, but using lazy language continually is just poor speaking. If you are in a position of frequently speaking in public, you owe it to your listeners and yourself to avoid using lazy language.

One time I gave a radio interview and afterwards I asked my wife how I did. She said I did fine but before each sentence, I used the word “actually”. No wonder the interviewer cut it off after a few minutes. Using a word too often is also an example of lazy language.

Next time you hear an athlete being interviewed, count the number of times he or she uses the expression “ya know”. When you become conscious of the lazy language used by others, you will become more conscious of using it yourself and you will begin to use it less.

I admit that I have some trouble hearing. Still, one of the worst mistakes a public speaker can make is not speaking loud enough. “Can everyone hear me is a good question to ask.” When there is a microphone available, too often speakers don’t think they need it or they don’t use it correctly, which is even more frustrating for listeners.

The next time you speak, just ask your friends or your boss or spouse if you speak loud enough and raise or lower your volume accordingly.  If you do have access to a microphone, make sure it is within six inches from your mouth.

The reason why most of us don’t do well with public speaking is very simple. We just don’t do it enough. It’s a learned skill and if you are as fearful of it as I was for many years, you just need to do more of it and get some feedback on how well you do.

You can improve your public speaking by speaking more slowly, enunciating your words, avoiding sloppy language, speaking so everyone can hear you and just getting more practice. If you do these five simple things, you will improve. That is a guarantee.

See, that wasn’t so painful.